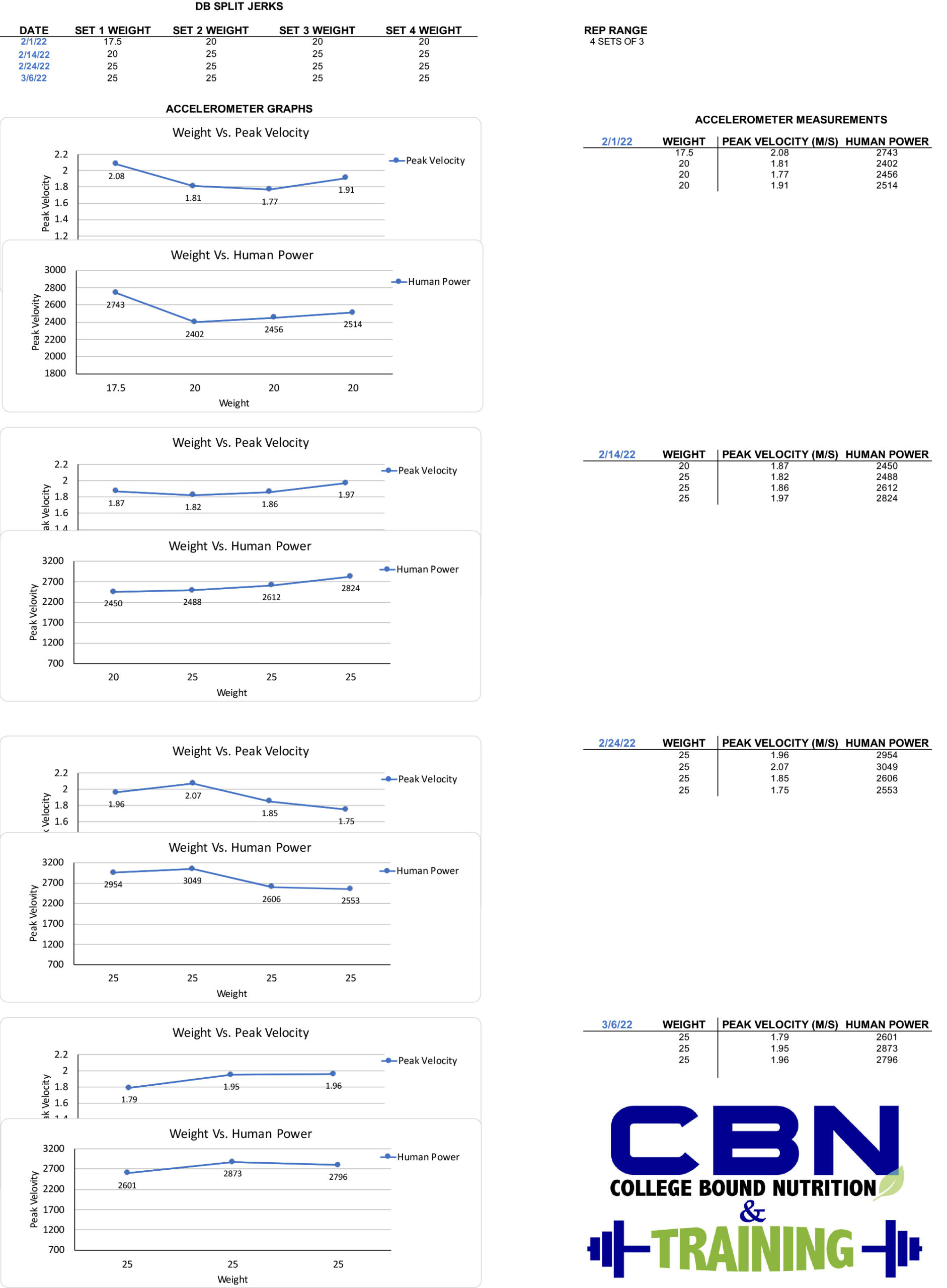 This is Aiden B., an average 13-year-old male who plays Baseball & Basketball in Freehold, NJ. Aiden had great Sports training and some experience working out with his teams doing agility and speed work. Despite this, he was unable to execute the skills taught to him with flawless precision for both of his sports. Aiden’s parents are making an investment for his High School and hopefully Collegiate athletic future with Human Power Training (HPT). In 5 short weeks, 12 total sessions, you can see the effect HPT had on Aiden and how it has translated into his performance in his baseball and basketball seasons. This chart is an example of only 1 exercise (DB Split Jerks) out of 30 total that Aiden has done in a 5-week period.

Aiden’s first set on February 1st was done with a weight of 17.5 lbs. and did yield his best results in terms of Peak Velocity and human Power output. However, the weight was too easy for him to use so we are not including it in his calculations and comparisons.

February 24th was the next day we took readings for this exercise, Aiden’s Peak Velocity shot up even higher and was 2.07M/S, and resulted In a Human Power output of 3049 using 25 pounds! Compared to the first measurement on February 1st, Aiden showed an increase of average Peak Velocity by 8.37% and an increase in his average Human Power output by 21.28% for this recording!

The final day we took recordings for Aiden was on March 6th. On this day, Aiden had a Peak Velocity Output of 1.96 and a Peak Human Power output of 2873. While this is not as high as the previous recording, compared to the first recording this still shows an increase in both his Velocity and Human Power!

Within the span of 5 weeks, Aiden’s average Peak Velocity increased by 8.37%, and his average Human Power output increased by 21.28%! These numbers are only for 1 specific exercise out of the many that Aiden did. While we did also notice improvements within other exercises regarding Aiden’s increase in Velocity and Power, the numbers for this exercise showed the greatest improvement over the 5-week cycle!

Within the 5 weeks that Aiden has been training to improve his HPT output, he has been able to stand out more to his coaches. Even though it is the off-season for baseball, Aiden’s team still practices regularly at indoor facilities. The biggest changes within the 5 weeks towards Aiden’s performance were the changes in his explosive power! The increases that Aiden was able to make with his HPT transferred over to his sports and are helping him become a more rounded player!

The power and speed that Aiden can hit the ball with has gone up since starting HPT training. He is now able to have better control over where he wants to hit the ball and drive through it, rather than before the ball would make contact with his bat and fly off in any direction. Again, Within the span of 5 weeks, Aiden’s average Peak Velocity increased by 8.37%, and his average Human Power output increased by 21.28%!

For basketball, the biggest changes that were noticeable in Aiden’s performance were in his acceleration running up and down the court, getting into better defensive positions, and his jumping vertical. Aiden started HPT in the middle of the basketball season, and towards the end he was able to jump up and grab more rebounds, get more blocks, and cause more opponent turnovers due to his increased athleticism!

The improvements with Aiden’s Velocity and Human Power have transferred over to his baseball skills and he is able to execute the skills that were taught to him with greater precision. We at College Bound Nutrition & Training look forward to seeing how he competes in baseball when it’s game time and the season gets underway!