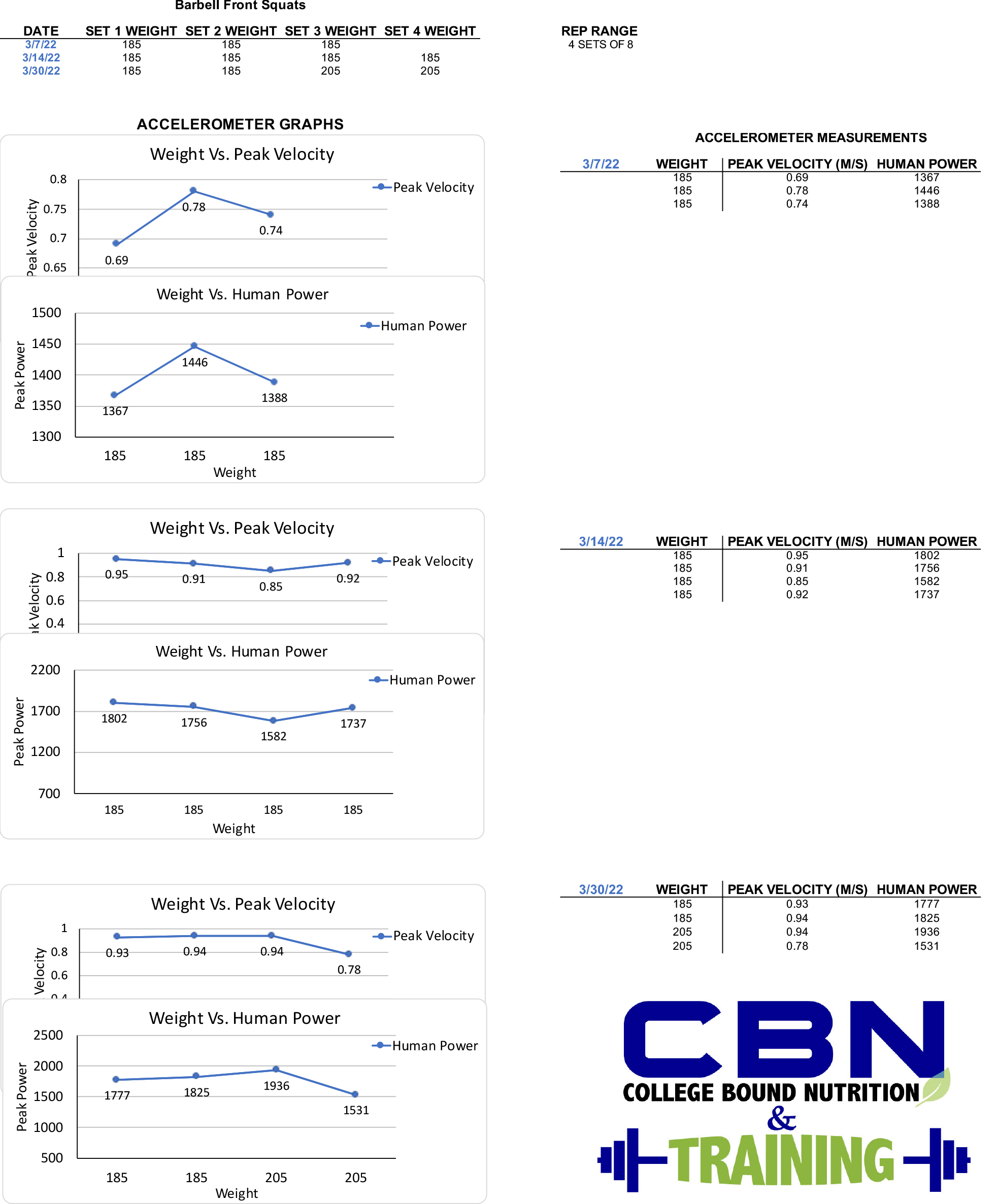 This is John M., an 18-year-old senior who plays Football in Colts Neck, NJ. John had great sports training and experience working out to make himself stronger. However, with sports, strength is not the only factor that determines how an athlete performs, they need to be quick and powerful. John received a scholarship to play football for The Catholic University of America and wants to elevate his game with College Bound Nutrition & Training! In 4 short weeks, 9 total sessions, you can see the effect HPT (Human Power Training) had on John and how it is helping him become a quicker and more powerful athlete!

March 30th was the final day we took readings for this exercise, John’s Peak Velocity was 0.94M/S, and resulted in a Human Power output of 1936 using 205 pounds! This is impressive because not only did John’s Human Power increase, but so did the weight that he used! Normally when an athlete goes up in weight, you see a dip in their velocity and power. However, John was the opposite and his metrics increased with an elevated weight!

Compared to the first measurement on March 7th, John showed an increase of average Peak Velocity by 21.80% and an increase in his average Human Power output by 33.89%.

These numbers are only for 1 specific exercise out of the many that John did. While we did also notice improvements within other exercises regarding John’s increase in Velocity and Power, the numbers for this exercise showed the greatest improvement over the 4-week cycle!

Within the 4 weeks that John has been training to improve his HPT output, he has been able to put this increased velocity and power to the test! Even though it is the off-season for Football, John is striving to prepare for his upcoming season with The Catholic University of America by making himself quicker and more powerful. Before starting HPT Football Training, John was tested for his 20 and 30-yard dash times. This would give us an indicator if he is getting more explosive, which is what you need in order to excel in sports, especially football!

While these numbers seem trivial, this was only after 1 month of continuous training to improve John’s Peak Velocity and Peak Power outputs under HPT. If you can keep these time changes consistent month after month, soon after a period of time the athlete will become increasingly quicker and more powerful. These changes will even be noticeable to the human eye! Again, within the span of 4 weeks, John’s average Peak Velocity increased by 21.80%, and his average Human Power output increased by 33.89%!

The improvements with John’s Velocity and Human Power have transferred over to his explosive outputs and he is able to execute the skills that were taught to him with greater precision. We look forward to seeing how he competes in the fall when it’s game time and the season gets underway!